Hydraulic Fracturing a.k.a. Fracking, is a very poorly understood and yet, much-feared process. It strikes dread into many hearts but most people don’t even know what it is.

The process of fracking begins by drilling a well vertically to the depth of the oil and gas reserves which are usually found 1 – 2 miles (1.6 – 3.2 km) below the surface. Once the vertical column has been opened, the drill is turned 90 degrees and drilling continues in the horizontal direction for thousands of feet. Once the drilling is complete, a large pipe is inserted into the openings. Slickwater (or fracking fluid) is then pumped into the pipes at very high pressures. Slickwater is 98-99.5% water but is mixed with additives such as detergents, salts, acids, alcohols and lubricants to make the fluid flow better inside the pipe. Better flow equals higher pressure. Slickwater also contains disinfectants as well as sand and ceramic particles, which are used to keep the fractures open.

The horizontal pipe is equipped with holes that can be opened and closed. Once the pressurized fracking fluid is in the horizontal pipe, the holes open and the fluid is forced out into the rock at pressures great enough to create fractures (cracks) in the surrounding rocks. During this time, the sand and ceramic particles they are expelled into the small cracks, keeping them open and ensuring that the gas and oil can flow freely without the operators continually applying pressure. The cracks allow oil and gas to escape back into the pipe then up to the surface. Think of a door separating two rooms, one filled with air and the other, with water. The door separating the rooms wants to stay closed but if you apply enough force (pressure) it will open.

Once the door opens, the water will flow into the other room. To keep the door open, you can either continue to apply pressure or stick your foot between the door and the frame. In fracking, the initial pressure is applied by the slickwater exiting the pipes, and the sand and ceramics are used to keep the cracks open allowing the flow to continue without applying additional pressure.

Once the pumping process is complete, gas and oil are pumped back to the surface along with the “flowback” liquid. Flowback liquid is a mixture of water and contaminants, such as “radioactive materials, heavy metals, hydrocarbons, and other toxins” that came from rocks. A portion (15-50%) of the slickwater that is pumped into the rock returns as flowback. This liquid is then sent to a wastewater site for treatment.

Once fracking is complete in an area, the wells are filled with cement and the equipment removed. In some cases, the pipe is cut below the surface while in others; the wellhead is left on site. 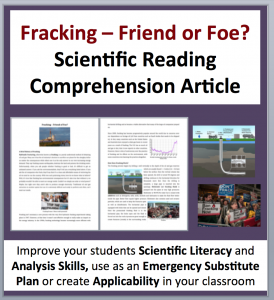 This post represents a portion of my Fracking Reading Comprehension article. The complete article covers the above information in addition to:

– A brief history of fracking
– Why fracking?
– Controversy
– The Impact of Fracking on the environment
– The Future of Fracking

The complete article was designed to be used in the classroom to encourage scientific literacy, engage students and provide applicability. To accomplish this, the full article also contains 7 comprehension questions and 4 extension questions.