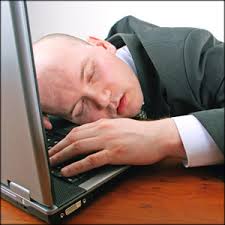 I find myself overloaded with information on a daily basis since like most people with young children, I’m up and going from 6 A.M. until they’re in bed just after 8.  I find taking a small break can be just what I need to keep from losing focus and becoming unproductive.  That’s not to say that you need to take a nap at work, in fact this action is highly unadvised. However, as mentioned in the article, meditation or simply letting your brain relax for a few minutes half-way through the day can be hugely beneficial.

Every now and then during the workweek—usually around three in the afternoon—a familiar ache begins to saturate my forehead and pool in my temples. The glare of my computer screen appears to suddenly intensify. My eyes trace the contour of the same sentence two or three times, yet I fail to extract its meaning. Even if I began the day undaunted, getting through my ever growing list of stories to write and edit, e-mails to send and respond to, and documents to read now seems as futile as scaling a mountain that continuously thrusts new stone skyward. There is so much more to do—so much work I genuinely enjoy—but my brain is telling me to stop. It’s full. It needs some downtime.

This posting was originally posted by scientificamerican.com and can be found HERE:

Freelance writer and meditation teacher Michael Taft has experienced his own version of cerebral congestion. “In a normal working day in modern America, there’s a sense of so much coming at you at once, so much to process that you just can’t deal with it all,” Taft says. In 2011, while finalizing plans to move from Los Angeles to San Francisco, he decided to take an especially long recess from work and the usual frenzy of life. After selling his home and packing all his belongings in storage, he traveled to the small rural community of Barre, Mass., about 100 kilometers west of Boston, where every year people congregate for a three-month-long “meditation marathon.”

Taft had been on similar retreats before, but never one this long. For 92 days he lived at Insight Meditation Society’s Forest Refuge facility, never speaking a word to anyone else. He spent most of his time meditating, practicing yoga and walking through fields and along trails in surrounding farmland and woods, where he encountered rafters of turkeys leaping from branches, and once spotted an otter gamboling in a swamp. Gradually, his mind seemed to sort through a backlog of unprocessed data and to empty itself of accumulated concerns. “When you go on a long retreat like that there’s a kind of base level of mental tension and busyness that totally evaporates,” Taft says. “I call that my ‘mind being not full.’ Currently, the speed of life doesn’t allow enough interstitial time for things to just kind of settle down.”

Many people in the U.S. and other industrialized countries would wholeheartedly agree with Taft’s sentiments, even if they are not as committed to meditation. A 2010LexisNexis survey of 1,700 white collar workers in the U.S., China, South Africa, the U.K. and Australia revealed that on average employees spend more than …

Please click here to read the remainder of the article