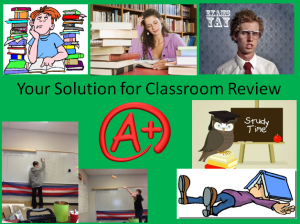 I came across this game from one of my peers and think it’s really awesome.  In fact I have been using this regularly this year as a fun and creative way to review before a test.

This posting was originally posted by toengagethemall and can be found HERE:

I have long been a huge fan of using games in the classroom.  Much like sneaking broccoli into the pizza sauce, I have always felt that games were that perfect balance of teaching and engagement.  When I first started, my consummate go to was Jeaopardy but….. Holy work Batman! Setting that all up was extremely time consuming.  I wanted to find a way to have a quick go to game I could use with any set of questions.  I bought myself a Nerf hoop and did a straight game of answer the question, get it right, shoot the ball and earn points.  For a majority of the kids this was enough but for one of my classes, nothing could get them excited.  For them, this game was accompanied by the sound of crickets, followed by awkward silence, followed again by crickets.

I came up with the solution one night while watching Survivor.  The contestant competed in a challenge where they answered trivia questions about their teammates.  For every question they got correct they got to put a coconut in their opponents trough.  When the trough was filled, the opponent was out.  The last person left, whose trough hadn’t been filled, was the winner.  I realized that what my game was missing was interaction.  My game simply had them winning points to beat each other.  What I needed to do was capitalize on the middle schoolers need to interact and torture each other.  Out of this revelation came the game that is now known by a decades worth of children called Grudgeball.  My kids love this game.  I have gotten emails from former students asking if I still play this.  One of my kiddos walked in first period today and said, “Oh, we’re playing Grudgeball today?  You just made my day Mrs. Wilkins.  I have two oral presentations and this game is just going to let me have fun.”  So, how do you play it?
1.  Each team gets 10 “X’s”. (I had a class, years ago that like to do 10 UFOs or 10 cactii but we needed to put an end to that:) )
(This was post game so not everyone had 10.)
2. Split your class into 5 or 6 teams, depending on how fast you want the game to go.
3.  Each group gets a question.  If they get it right they automatically get to erase two X’s from the board.  They can take it from one team or split it.  They can not commit suicide (take X’s from themselves).
4.  Before they take off these X’s, though, they have a chance to increase their ability to get the other teams to hate them.  They get to shoot the Nerf ball.  I set up two lines with masking tape.  One is a two point line while the other is a three pointer.
5.  If they shoot from the two point line and get it in, they can take four X’s off the board.  If they go from the three point line, and make it in, they can take five off the board.  If they don’t make it they still get to take the original two off the board.
Click here to read the rest of the article

Teaching the Phases of the Moon

Grudgeball – A review game for everyone

Human Digestion Demonstration Part 2 – The Bread In The Bag

Teaching the history of the atom in an interesting way

Teaching the Phases of the Moon