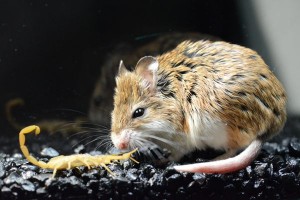 The Arizona Bark Scorpion is perhaps the most dangerous scorpion in North America. It’s venom can cause severe pain in adult humans, immobilizing and potentially causing convulsions. Many people say it’s similar to getting a bad electric shock. Some also experience swelling of the area, frothing of the mouth, and respiratory failure.

Despite its harmful effects on humans, the grasshopper mouse which typically weights a mere 3/4 of a pound, is not afraid. These little guys easily resist the painful, and potentially lethal, stings of the scorpion all the time. The grasshopper mouse simply doesn’t feel the pain. It’s nervous system has evolved overtime so that their pain pathways are immune to the venom. Watch the video below to see this in action.

*Disclaimer – science content ahead* You feel pain because your nerves have channels along their membranes where sodium, potassium and chloride ions move in and out of the cell. When there is a sensation such as pain or touch, these channels open to allow a signal to be sent along the nerve to receptor areas in the brain informing you of a physical sensation, i.e. pain. For more information, please watch the video below.

Normally, scorpion venom trips two of the nerve-firing gates: first a “gatekeeper” channel, followed by one that broadcasts pain to the brain. “Normally, scorpion venom activates a protein in the cell membrane called Nav1.7 that makes it fire pain signals. But grasshopper mice, they found, have a mutation in a different protein, Nav1.8, that prevents the signal from travelling any further and reaching the brain” essentially shutting the entire pain pathway down. The consequence is the mouse doesn’t feel pain when the scorpion stings it.

How to apply it in your classroom