When we talk about the climate, the first thing that usually comes to mind is the temperature in an area. Africa typically has a high temperature and therefore, we think of it as having a warm climate. Antarctica is usually cold so it has a cold climate. But the term actually means more than just that. Climate is defined an area’s “average weather”, including temperature, precipitation, humidity, wind and even seasons (What is climate change?, n.d.). Like many things in the natural world, an areas climate changes over long periods of time. From temperature variation and rainfall patterns on a human time scale, to the repeated ice ages over millenniums, great oscillation in our climate is not a surprise (Weart, 2016). In fact, natural ice ages occur approximately every 100,000 years (ETH Zurich, 2013). Natural climate change occurs for many reasons, from changes in wind pattern, such as an El Nino event in the Pacific Ocean, and the movement of tectonic plates (Lambert, 2016), the same thing that causes earthquakes. The last great climate change happened about 10,000 years ago, when the slight shift in Earth’s orbit caused the last ice age to end and we entered the modern climate era (Lambert, 2016). 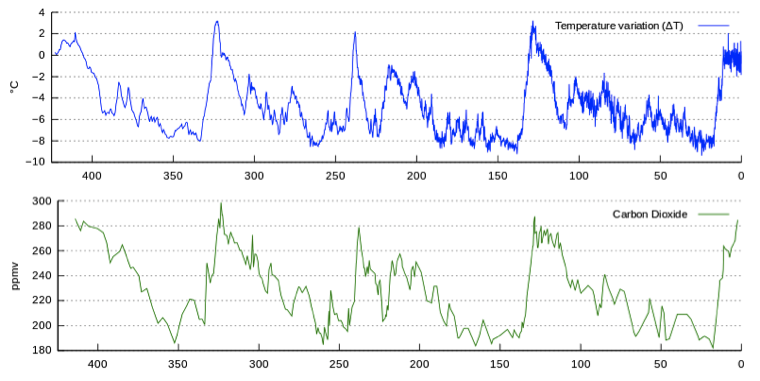 Image Credit: NOAA with time on the x-axis – http://www.ngdc.noaa.gov/paleo/icecore/antarctica/vostok/vostok_data.html

It is true that climate change is part of the natural process, as represented throughout history. However, in the past few of decades, it became one of the biggest issues we face. NASA has reported a global average temperature increase of 1.4° Fahrenheit since the 1880s, and stated that nine out of the ten warmest years have happened since the year 2000. These records date back 134-years (Global Climate Change, n.d.). This seems interesting, but also a bit strange; how can you measure the “average temperature” of the globe if the hottest part of the earth can be 55° Celsius warmer than the coldest part and at the same point in time. Furthermore, half of the globe is cooling down at night while the other half is getting hotter during the day. How do we capture temperature on a global scale? 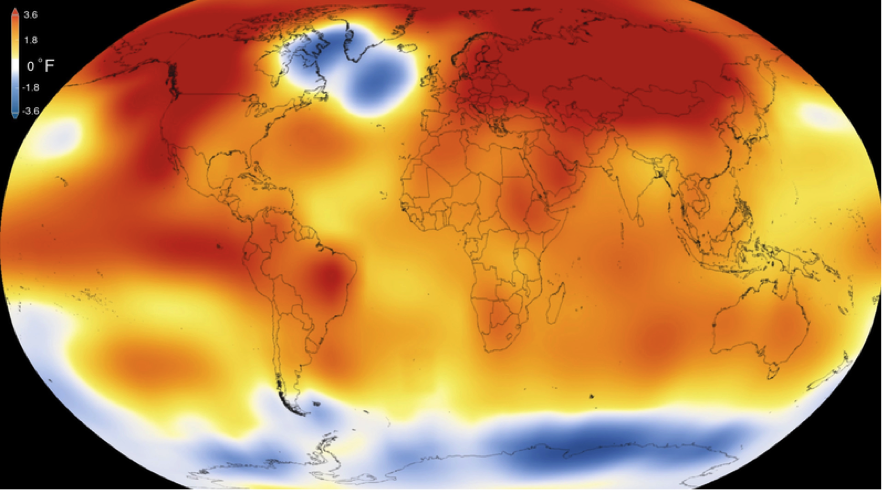 What’s happening with the climate now? Why are we concerned about it?

Isn’t climate change supposed to be a natural process as evidenced by history? As stated above, it does occur every 100,000 years and humans haven’t been around that long. While there is truth to the cyclic nature of climate change, a point has come in history when these changes are no longer natural, but anthropogenic, meaning humans are directly responsible for the current 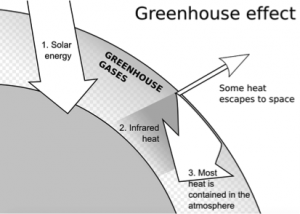 climate change. One of the most significant effects we have on our environment is our large quantity of greenhouse gas emission, mainly carbon emissions. How does this influence our temperature? It all comes down to the greenhouse effect. Carbon dioxide, ozone, nitric oxide, water vapor, and many other chemicals are called greenhouse gases. They have the ability to absorb thermal infrared waves (heat energy) – a wavelength of light that we can’t see. When these gases accumulate in the atmosphere, they tend to trap these light waves and reflect them back onto the earth, therefore causing the surface temperature to rise. Under normal circumstances, the greenhouse effect is vital for our survival as it’s a natural process that keeps the Earth warm enough for life. However, when humans enhance the greenhouse gas effect, global warming occurs. 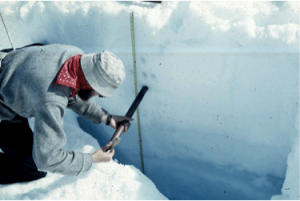 How do we know that our CO2 emissions are going into the atmosphere and causing these problems? Using different technologies to measure CO2 levels from hundreds of thousands years ago until the modern day, scientists have collected data that indicates a sharp rise in CO2 levels after the industrial revolution. This is not just a coincidence; the industrial revolution not only marked the advancement of modern day technology, but also the start of an era of uncontrolled fossil fuel usage (fossil fuels are fuels found naturally in the earth like coal, oil, and natural gas that are formed from decaying organisms over millions of years). Another way we contribute CO2 to the atmosphere is through deforestation. Plants are great CO2 sinks, meaning they are able to absorb atmospheric CO2 to grow and perform photosynthesis (creation of sugar from water CO2 and sunlight). We have caused considerable environmental damage through deforestation. 32 million acres of rainforest are chopped down per year and this has two effects. First, the CO2 stored inside the 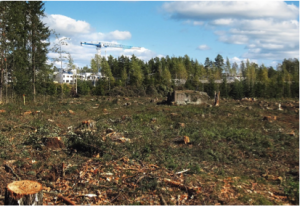 trees is released into the atmosphere (Scheer, 2012). Second, the trees are no longer able to perform photosynthesis by absorbing the CO2 and therefore, more is left in the atmosphere.

The level of CO2 is measured in parts per million (ppm), or how many CO2 molecules exist in a sample of one million molecules of air. Dating back 400,000 years ago, the levels of CO2 increased and decreased, but never exceeded 300 ppm. Yet in the last few centuries, CO2 levels have steadily skyrocketed to our present day value of 403.28 ppm (Global Climate Change, n.d.). To put things into perspective, the rate of current warming is 8 times faster than ice age recovery warming (Lindsey, 2010).

The unequivocal evidence is accompanied by a slew of modern day consequences. Sure, a 1.4◦F increase in temperature might seem miniscule, but in retrospect, the difference in global temperature between glacial and interglacial ages is also just a few degrees (Palfreman, 2000). Today, the result of this temperature difference is observed in the rising sea levels as the arctic glaciers melt, extreme weather events occur across the globe, and oceans are undergoing acidification, just to name a few (Shaftel, 2016). Dire consequences are associated with each event. Melting of the glaciers not only threatens the polar species’ habitats, but also increases darker land surface area (ice which reflects light melts to expose the darker, non-reflective ground), which is more prone to absorb 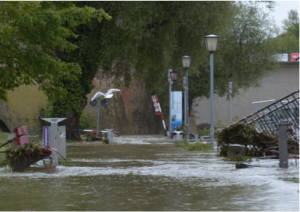 heat. This positive feedback event (the previous event increases the severity of the next and so on) of increasing landmass ends up warming the planet (Palfreman, 2000). Extreme weather patterns such as increased droughts and intense rainfalls can pose challenges to agriculture, and cause famine and floods in many areas of the world. Acidification of the ocean endangers marine organisms that produce calcium carbonate shells or skeletons by reducing their ability to synthesize calcium related structures—diminishing coral reefs is the perfect example (Shaftel, 2016).

What can we do to help?

What are the main anthropogenic sources of carbon dioxide emission? Burning fossil fuel (fuel for cars, coal and natural gas for energy, etc.) is the primary reason. To date, the world has taken some action to control carbon emissions—the most significant being the Kyoto protocol, which was put into effect in 2004 to establish legally binding CO2 emission limits for industrialized countries (The UN Climate Change Convention and the Kyoto Protocol, n.d.). While we often imagine tall industrial factories regurgitating dark smoke to be the main culprit, in reality, it only represents 21% of US’s total emissions. Industrial factors fall closely behind

our use of electricity (30%), and transportation (26%) (Sources of Greenhouse Gas Emissions, 2016). This means to protect our planet and the things living on it, we should start with changing ourselves. Some of the things we can do to help include: using energy-efficient light bulbs, carpooling and using public transportation or walking, and turning down our air conditioner in the summer and furnace in the winter. It’s important to recognize your power as an individual to be more environmentally aware, but many of these changes need to happen on a bigger scale: changing urban infrastructures, finding new energy sources that don’t hurt the planet, and starting to put the health and well-being of the planet, ourselves, and our future generations ahead of money.

As Jimmy Kimmel put it, “You know how you know that climate change is real? When the hottest year on record is whatever year it currently is.”