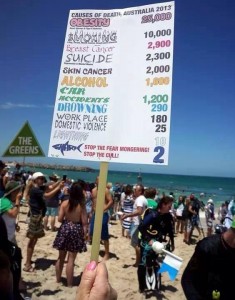 The Western Australian Government has decided to institute a shark cull.  “Any shark more than three metres long – which could include Great White, Tiger and Bull sharks – will be shot and disposed of” after be ensnared by the baited hooks which line the beach 1 km off shore.

More than 4,000 people gathered for a demonstration at Perth’s Cottesloe beach alone.

Although sharks have a bad reputation thanks to Hollywood movies, in reality they are responsible for very few deaths – 2 per year in Australia and 5 around the world.  Conversely, Hippos kill almost 3,000 people annually in Africa. Deer kill over 130 and yet we limit the hunting of them.

Here are 20 things that kill many more humans than sharks each year. 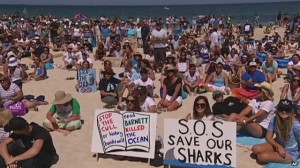